I decided to stop trying to use two different computers (one Win10 PC for amateur radio and one Mac Mini) more or less at the same time, switching back and forth keyboard and screen. So I upgraded my Parallels to version 15 (at reduced price..), installed Win10 on the Mac Mini and started to transfer the different amateur radio programs to the new Win10 virtual machine.

Running WSJT-X on Win10 in Parallels works, but I noticed dropouts on transmit. No issues on receive, only transmit. Audio is all about timing, and generating the WSJT-X audio requires proper timing, something that a virtual machine will struggle with. The dropouts only happened when generating a lot of interrupts on the host, for example by hitting the pi-hole dashboard with Safari. Since WSJT-X (and the great GridTracker program) exists for Mac as well, I moved to the Mac versions.

I have an IC-7300 and IC-9700 connected to the Mac Mini. But in WSJT-X for Mac, the two audio devices have the same name, “USB Audio CODEC”, and using a separate profile for each transceiver does not work since the first “USB Audio CODEC” is always used, even if you select the second one in setup.

In “Audio Midi Setup” these audio devices are named “USB Audio CODEC 1”, “USB Audio CODEC 2” etc. Therefor I wanted to rename the USB audio devices, just as I did on Windows. Well, this turned out to be not that easy. There is a sort of hack, to be found on Apple Developer. But this will likely break with updates etc. The solution lies in the use of aggregate audio devices, as described on the WSJT-X forum. An aggregate audio device is a virtual device that you create in “Audio Midi Setup”, and consists of one or more real audio devices. Such a device can be renamed by double click on the name. For the four Icom audio ports (IC-7300 in/out & IC-9700 in/out) I created four aggregate devices and named them IC-7300 Mic, IC-7300 Speaker, IC-9700 Mic and IC-9700 Speaker. 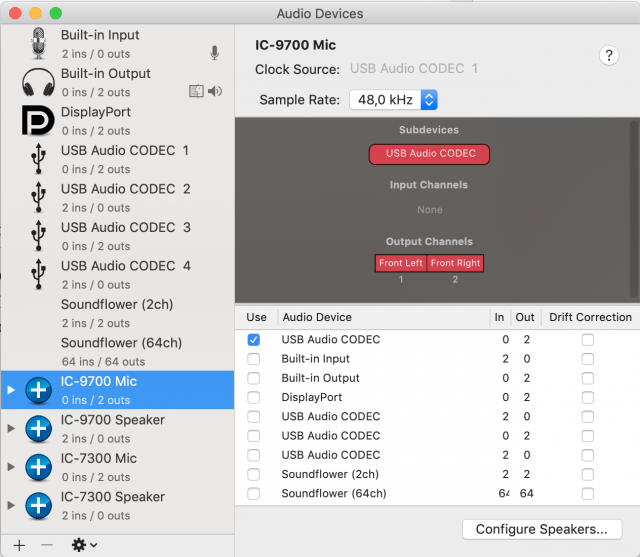 Problem solved, as long as you do not change USB ports. Here Win10 clearly wins …

2020-10-05
Previous Post: Using multiple Icom transceivers on Windows
Next Post: ALC and the IC-7300 – About talk-power and modifications